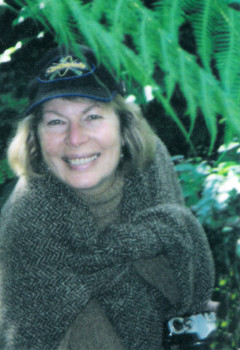 Helen Burkett FSWS, FWS, SWS, NWS is originally from Arlington, VA, moved to Sarasota, FL in 1974, where she maintains her studio. She attended the University of Maryland, the Corcoran School of Art, and various study groups.  She has studied with Frank Wright of Washington, DC, Valfred Thelin of Ogunquit, ME, William Packner of Woodstock, NY, and others.

and have been included in many exhibits including those sponsored by the American Watercolor Society, the National

She exhibited at and assisted in running the Hilton Leech

living traveling around the country selling her paintings at

fairs where she also won many awards.  Since then she has

been teaching an intermediate and advanced watercolor

painting class which has morphed into a twice weekly Watercolor Open Studio on Wednesday and Thursday afternoons.at the Suncoast Technical College, ACE

Helen and her work were the subject of the article "High

painting "Vanilla Dream" is included in the April/May 2010

edition  of The International Artist.

She has been included in Who's Who of American Women

The main theme of her current work is an exploration in transparent watercolor of sunlight and shadow and the rhythm that evolves from the abstract design they create.